The convention was fun. The hotel where were stayed was fancy (or seemed so from a first glance. I’m not so certain once I got to peek beneath the surface a bit — it’s amazing what a little observation and opening up conversations with people will provide. Can you hear my evil laugh? Yeah, writers think way too much, especially when the expensive room that has been booked has no microwave, refrigerator, or breakfast as other less expensive hotels have). So, yes, for as swanky as the hotel seemed, I came away feeling as if I never want to stay there again. And, what is with restaurants in Utah all closing at 9:00? It’s like they roll up the streets then. Yes, even on Friday and Saturday nights.

Then, it rained on us Thursday night after the con. My son and I, hungry because the con ended at 9:00 that night (and, yes, no place open to eat) had to walk seven blocks through the pouring rain. The streets were filled with water, streams running down every slope in the ground, cars driving close to the curb to (intentionally) splash people standing too close. We had taken the umbrella, expecting a light sprinkling. We weren’t expecting flash flood weather! Fortunately, there was a Pizza Hut driver who came out in the rain to make a dinner delivery for us.

Friday night, we got out of the con at 8:00, so we did make it to the mall for dinner. Other than being a maze, the mall across from the Salt Palace where the con was held is amazingly beautiful. That night was a nice walk back to the hotel, though I had no refrigerator to put my left overs in, so Adrian ended up finishing my meal back at the room. Have I mentioned that I hate not having a room with a refrigerator and a microwave?

Saturday started off as a nice day, but we knew it would rain about the time we got done. It was raining, though more acceptably and more as we’d expected on Thursday. I still had to drag my art, books, and booth setup stuff through the rain to the parking garage. Then we went back in to watch the end of the cosplay contest. I wanted to declare “Envelope Gate” because clearly the people I thought should have won didn’t even place. Grr! I guess I judge my cosplay differently than the judges do. (grin) Anyway, by the time we got done, it was 9:30. We though with it being Saturday, surely the mall was open until 10:00. Nope! So, driving through the rain this time back to the hotel to order Pizza Hut again.

As I said, the con itself was fun. I got to see some old friends, meet new artists, was surrounded by creative minds, met fans (Hi, Sam. I hope you’re reading this! You especially made my day.), saw other people I’d met at a show I did earlier this year, and had to make a rush order to have some books for Snake River Comic Con next week, as well as an order to get a bunch of books in to have on hand.

One story in particular I have to share. On Saturday afternoon, there was one family walking by and they were all dressed up as the characters from Little Shop of Horrors. The husband (who looked quite a bit like Rick Moranis) was carrying the baby in a front carrier fashioned up to be a pot. The baby, of course, was Audrey II, while the wife was Audrey. The baby was crying hard and waving its leaves and vine arms all around. Audrey went and got a sippy cup from the backpack her husband was also lugging around. She went to give it to the baby, who pushed it away until Mom gave up and put it away. I called out, “That didn’t work because Seymour has to feed her!” Feed me, Seymour! The comic book writer/publisher sitting next to me nearly fell out of his chair with laughter, which made me start laughing harder. I don’t know how much the family appreciated my humor, but it seriously was too perfectly precious of a moment to pass up.

Watching all the costumes at comic con is truly one of my favorite things. People are so creative! Someday, (someday) someone will come to a con dressed up as Steigan. Yeah, there’s my secret dream. Someday. I live in hope.

I also came up with several things that I need to do this next week to get ready for the next con, as well as future shows. So many things to do, so little time. Once again, I ask, “Where is my Jason?” I need a personal assistant just like Loki has. Why hasn’t Loki brought that into my life yet? (grin)

Speaking of Loki, I also talked to a vendor right down the aisle from me who had research that I need for the 6th Loki novella. He saved me a lot of time in having to dig for information, plus helped me to craft part of the story that will take place in another adventure. I will come back to this in a future blog because I want to give him a shout-out for all his help.

Okay, enough about con life, at least until next week.

I did spend some time working on my website this week, as well as going through first reader suggestions on Space Ninjas. Dang, she’s good. There were several good points and word choices for me. I’m hoping to have it set up for pre-order before I go to Snake River Comic Con, but I’m not certain I’ll get that far along.

I am going to be in another bundle next month; more details on that to come. Right now though, you can get this amazing bundle for the super low price of $3.99. 15 stories for less than $4.00 – go get ’em! 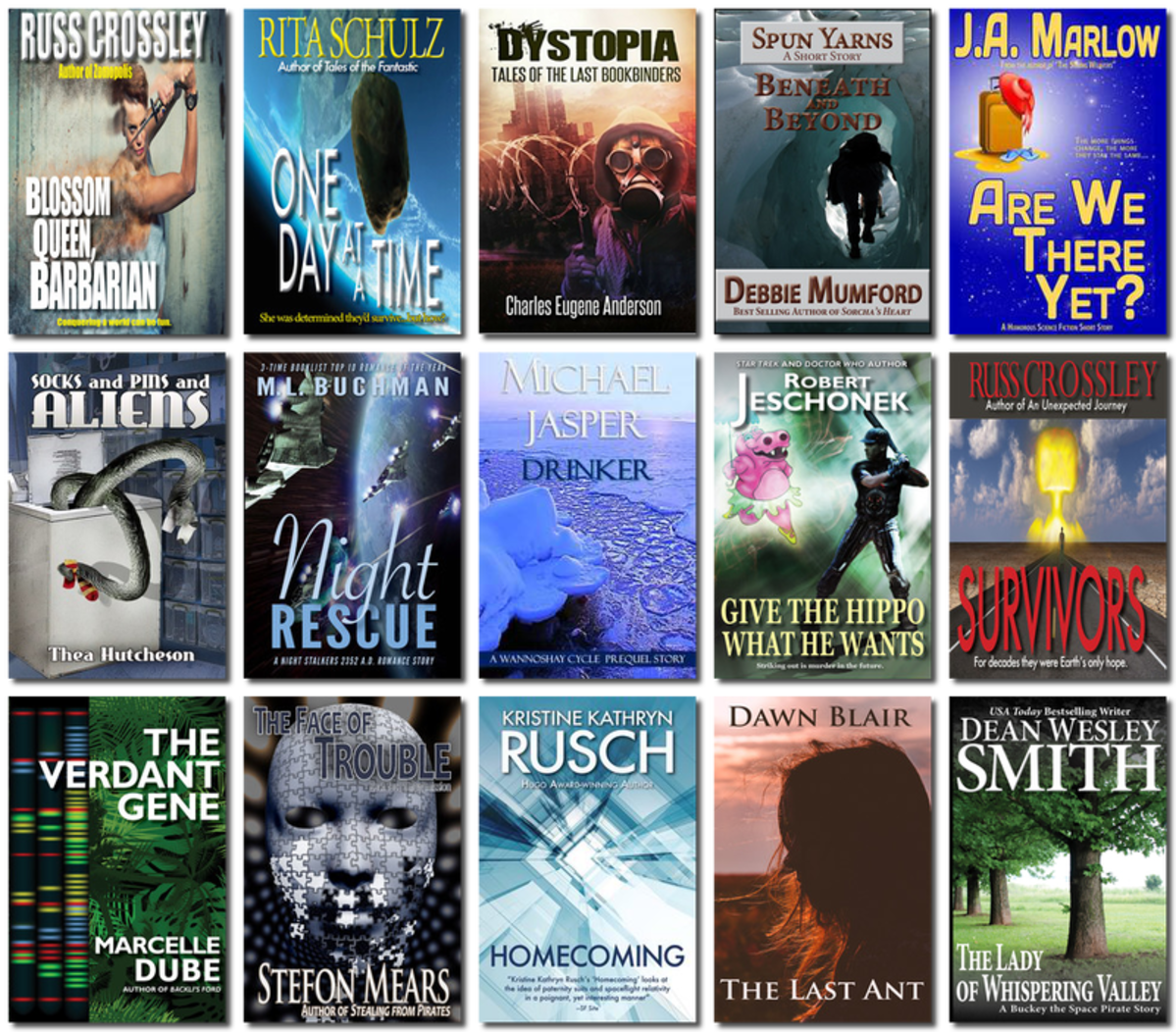 Now let’s look at the numbers, which aren’t as spiffy as I wish they were, but hey, I was at a con and traveling. I managed what I could. Con’s are tiring. So, the numbers:

Fiction words written last week: 1,665 words – gulp and ouch. This certainly isn’t getting me closer to my goal. I’m really going to have to kick it up for the remainder of the year if I want to get closer to it, let alone hit it.

Drawing/painting last week: I didn’t do any painting this week. I spent my evenings getting ready for the con, then I didn’t take my paints with me. Good decision — I didn’t really have time to paint anyway. I know I didn’t talk about it, but I also sold several smaller paintings. I really need to get to work on doing some more. But I have other tasks to do first, so I’m not sure if I’ll have time next week to get things wrangled around to paint.

Audio: I spent 4 and half hours editing audio. Right before I left for Salt Lake, I got the audio for Stardust all uploaded. It should soon be out to Amazon, Audible, and iTunes.