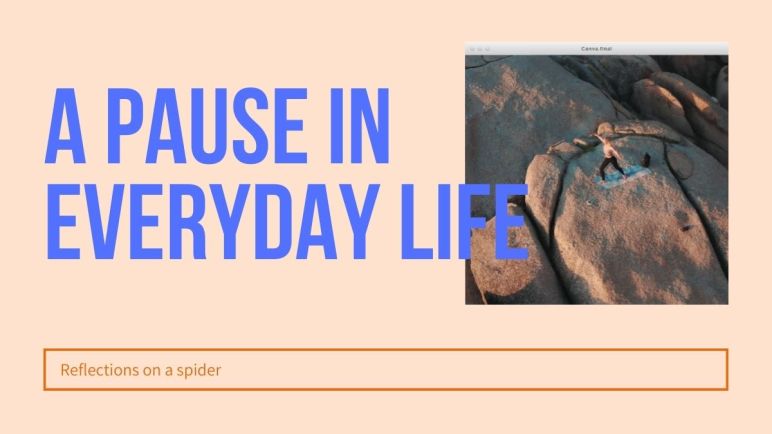 Last week while I was driving home, I saw a little spider clinging to my windshield. Now, I’m not one for spiders, but when they are outside, I’m good with that. Spiders have their necessary place in keeping bugs under control. So, outside is the place they should be.

But this one all hunkered down on the glass intrigued me. Yes, I’ve had spiders on my windshield before, so it must have just been my pensive mood that really made me contemplate this one.

As I drove further and further away from my starting point and he clutched to the glass in a tight little huddle against the wind, I admired his strength. How much force pressed against his body as I drove at 30-30 MPH? Would he hang on long enough for me to get out to the county and could he withstand 50 MPH? Would he make the drive all the way home with me?

While I was stopped at lights, he slowly crawled his way up to the top of my car. I don’t know if he made it or if he finally just jumped. Still, he was so far from the starting point that it was like a trip across the United States for him. If he’d made it across the bridge, it would have been like being on the other side of the world. And if he’d clung to my roof or my windshield the whole way, he’d find himself in a completely different world, one that looked similar but was so far from the other spiders he’d known. Did he leave anyone behind? Would he even realize how far he’d gone?

I hope my little hitchhiker made it somewhere safe after he was done riding with me. I know spiders are resilient, but probably not nearly as reflective as I was being while watching him ride with me. Sometimes, it’s just nice to slow down, notice something small like a spider on your windshield, and think about how its life is in the midst of changing. I think it helps us reconcile our own journey too.