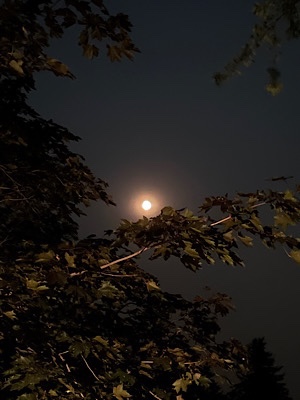 Something lurked outside my door, but I didn’t know it. I stepped outside with my dog completely unsuspecting.

I should have felt its eyes on my back, but I didn’t.

It wasn’t until I came back to the house that I saw it:

This beautiful little praying mantis was hanging on my screen door. Isn’t he delightful?

I fetched my son to come look, though he wasn’t nearly as impressed as I was. I’ve seen praying mantises in my yard before. In fact, this one is tiny compared to the first one I saw. I’ve never seen one that was brown either, only the green ones. So this one startled me at first because it wasn’t what I was expecting.

At first, he was all waving his scythes around at me as I started taking pictures. Then he started a hypnotic back and forth sway. If I thought it would’ve come out, I would have taken a video.

He remained out there for quite a while as I noticed when I went out later in the evening to water, though he did crawl further up my screen door. By this morning, he was gone. No surprise there. I hope he found a place that was warm because it got chilly again last night. While he is here, he is most welcome to eat all the boxelder bugs he wants.

He probably heard me talking about the creepy-crawlies of spider research and came to help alleviate me of my fears. (grin) I like that thought. Apparently as a spirit guide, they are a sign of good luck, wisdom/intuition, and making good choices. I certainly could use all of that.