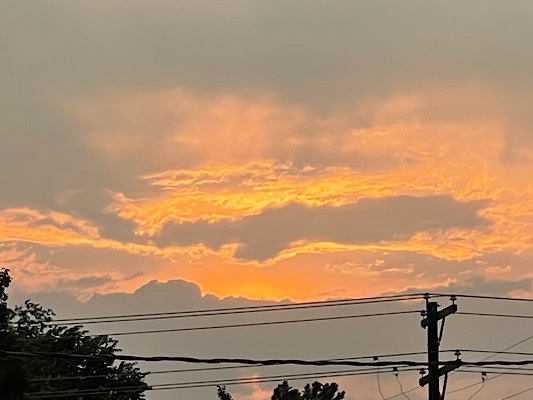 No recovery day for me. I’ve been going since I got up this morning.

Yes, there was laundry. Then there was trying to trim Kreeli up a bit. I think the 15-year-old Shih Tzu is as tired of being groomed as I am of having a dog that doesn’t shed. I got her tamed up a bit, but she still needs work. Then I ran her through a bath. Now she looks like a little cloud. I love it when she’s all soft and fluffy. It’ll last until she rolls in something.

Then it was Merlin’s turn for a bath. I don’t think he’s ever enjoyed a bath so much. His tail was wagging the whole time. Unfortunately, the cold snap we had a couple weeks ago trigged fur to come in. The 80-90 degree weather returned last week and now he wants to shed. I had about as much hair off of him as I took off of Kreeli. I don’t think he’s ever lost so much hair at once.

My son and I went then to weed the garden. It’s not perfect. Even though it was only in the high 60’s when we were out there, the UV rays were intense and made us feel hot. So, the garden is good enough for now; at least it’s tamed back some.

We also blanched, diced, and froze a bunch of the Black Prince tomatoes. Then we washed, dried, vacuum sealed, and froze 80 habanero peppers in packages of 8-10. To keep them all together, we put them all in a gallon bag. Here’s a picture of all the peppers in the bag:

We still have cucumbers to deal with tomorrow, as well as our first zucchini which got huge. I have pictures, but I’ll post them later when I talk about my strange zucchini plant. (grin) I’m hoping I can convince my son to make some cucumber bread, which I’m told is a lot like zucchini bread. My stomach doesn’t like cucumber as much as it once did, so I have to be easy on them, but I’d like to try it.

We took the dogs to the vet’s for their vaccinations. Another trip done without incident. Merlin is one of those “Use Caution” dogs. One bad trip to the vet as a puppy and he’s blackmarked for life. (No, honestly he probably deserves it. His poor little brain really does only know survive and protect. I know he would bite if he felt threatened.)

While Kevin made us chicken parmesan (except we didn’t have parmesan, so it was the cheese blend we had on hand – still very good) for dinner using some of our Black Princes and adding a habanero pepper to his, I worked on bookkeeping.

I haven’t gotten a whole lot of writing done today. This blog so far is the most. I keep reminding myself that someday winter will be here and I’ll be done with all the outside work. I’m going to head now and see if I can get a few more words in. Every little bit counts. I’d say that tomorrow won’t be as busy, but I’m afraid it will be. That’s okay though. Some days are like that. Once the decks are cleared, then I can spend the days being creative. Somehow, it all works out.