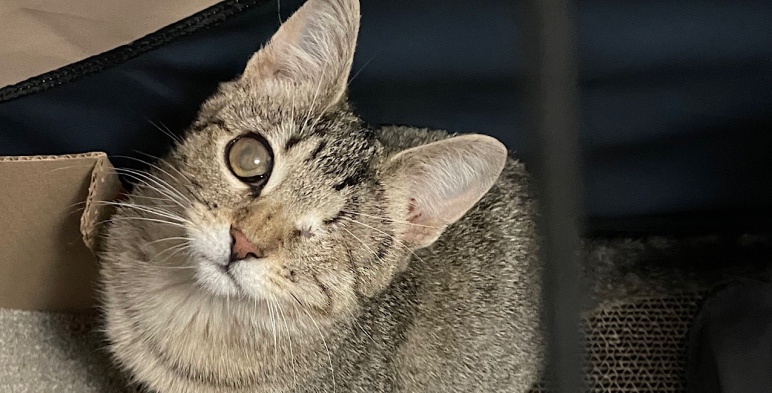 Whenever I give Temmy a jangle ball these days, the first thing she does is pick it up, look around to see if anyone’s going to get into her way, and then runs for the bathroom. She drops the jangle ball into the bathtub and jumps in to bat it all around. She absolutely loves it.

Today, Temmy was in my office and found one of her balls that had escaped her at an earlier time. I put it into a box which had held some apples we got at Costco. She’s totally smashed the center of the box from her weight, but she still loves to push her balls around inside.

She’s such a distraction from my writing. I try to write. She comes in and tries to explore and get into places where she shouldn’t be. I have to redirect and entertain until she’s good playing on her own or wanders off. At least until I hear a crash and have to go find out what she’s knocked down this time. It’s a whole thing. I’m amazed that I get anything done some days.

Today I was working on Siva’s story. I’m still filling in parts and reading through sections I had already written. At some point a few weeks ago, I jumped to the end and read some notes I’d had about the story and where I thought it was going at the time. While not all the notes will survive and incorporate into the story, I certainly didn’t think that the direction I had been thinking about taking my story in was going to last. I’m still not sure it will, but I was writing a scene to set it up. I knew I could always loop back around and deepen that scene if I needed to, or if I didn’t the scene would be fine as it is. I’m so excited to see what’s going to happen with it, what my creative voice wants to do. It’s like rolling the jangle ball around the tub.