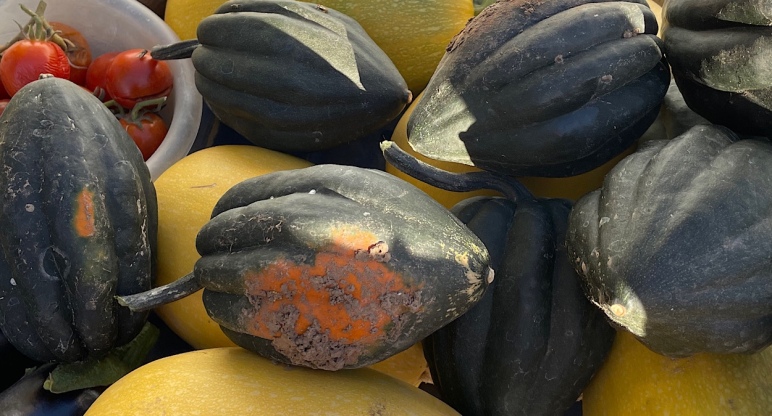 Merlin first. His vet visit went as well as expected. He has an infection and possibly some allergies as well. Vet gave him a shot, handed me some medicine, and sent us out the door. Merlin has been sleeping most of the day and when we’ve been outside, he’s wanted to sit in the sun. I know when I get a sinus infection, I enjoy sitting in the sun too. I don’t know what it is.

So, since he wanted to spend time outside and he’s all medicined up so that he’s not sneezing his head off, I went out a stared at the garden. After reviewing the weather over the next few days, I decided this was a great day to do a final harvest of the squash. Above is a lot of the acorn and spaghetti squash. Here’s some of the zuchinni.

That one that’s in the back is as long as my thigh. Guess I know who’s having some more stuffed zucchini. Tonight, I made an acorn squash with some chicken. I love that I can throw a whole squash as well as my chicken in an pressure cooker and have dinner done in half an hour!

After I harvested all the squash and the tomatoes that were ready, I began pulling plants out of the ground and clearing it out. All that remains are my broccoli plants, eggplant, tomatoes, and my crimson watermelon which is trying to grow one stupid melon. I’m a little bitter about that stupid plant. But, if my broccoli continues like it did last year, I could still be harvesting broccoli into December. I might try tarping them to protect them from frost just to see what happens.

I’m hoping my eggplants grow well in the next few days. I have a bunch coming along, but I want to give them a bit more time.

I have been using this recipe as the basis for my eggplant. Olive oil, salt, pepper, and parmesan cheese. Shake. Bake. Love it. Even the leftovers heat up well. I only wish that my eggplant hadn’t taken so long to get started. Now I know that hand fertilizing is the way to do it. However, it’s probably good that I’ve had the late eggplant because of all the squash I’ve had.

Next year, I think I’ll grow acorn squash, broccoli, zucchini, tomatoes, and eggplant. Not too different from now, but I think I’ve had enough of the yellow and spaghetti squash hybrids for a while. Or maybe I’ll just do spaghetti squash next year and not do zucchini. At this rate, I might have plenty still in my freezer next year. I did mention that one of them was as long as my thigh, right? (grin)